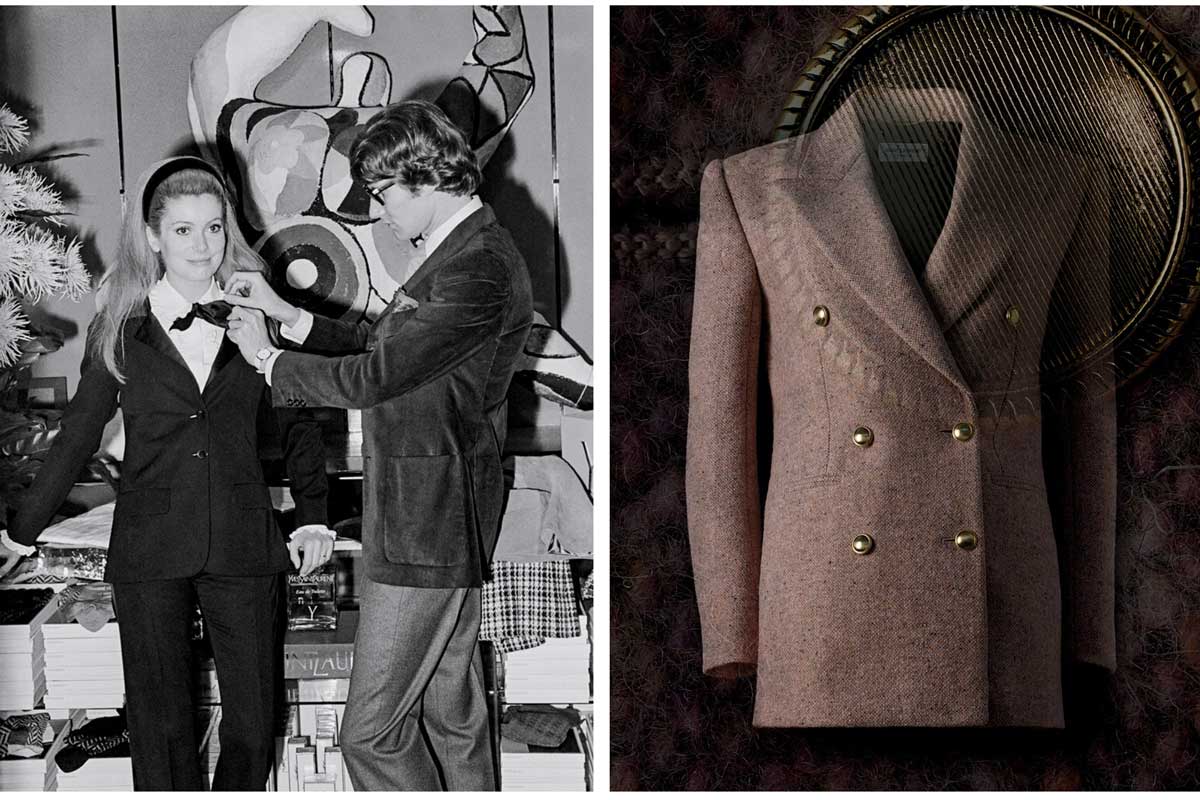 “I was deeply struck by a photograph of Marlene Dietrich wearing men’s clothes,” said Yves Saint Laurent. “A tuxedo, a blazer or a naval officer’s uniform — a woman dressed as a man must be at the height of femininity to fight against a costume that isn’t hers.” That 1933 image of Dietrich, dressed in a tailored suit with one leg hoisted atop the running board of a Rolls-Royce, inspired him to create his now iconic Le Smoking tuxedo, which debuted in the designer’s 1966 haute couture collection. Once reserved for the cigar rooms of English gentlemen’s clubs, Saint Laurent’s black grain de poudre blazer with silk satin lapels, worn with a cummerbund, ruffled jabot blouse and bow tie over side-striped slacks, shocked the sartorial world.

It was the first time a women’s designer had presented trousers for evening wear. But it quickly became the uniform of liberated women: The model Bianca Jagger wore a white version when she married Mick in 1971. The singer Françoise Hardy arrived at the opera in Paris dressed in a Smoking (and was heckled). And when the socialite Nan Kempner was famously turned away from the Manhattan restaurant La Côte Basque while wearing the tux (their dress code prohibited women from wearing pants), she slipped off her trousers and turned the blazer into a minidress. Saint Laurent would include a variation of Le Smoking in each of his collections until he retired in 2002, designing over 200 of them.

The house’s latest iteration, a sharp double-breasted jacket, is part of Saint Laurent’s fall 2020 women’s collection. Inspired by ’90s YSL runway looks, the creative director Anthony Vaccarello emphasized the precision of the jacket’s proportions with a strong, squared-off shoulder, retro-pointed notched lapels and oversize gold buttons. Worn with silk jabot blouses over latex leggings and rendered in Prince of Wales check, houndstooth, gabardine and wool tweeds, the palette ranges from pale rose and powder blue to crimson and electric violet. It’s a very fitting, very Yves revival: “Of all the things I’ve done, I prefer the ones I’ve borrowed from the masculine wardrobe,” Saint Laurent once explained. “This ambiguity intrigues me. Besides, it’s how we live now.”