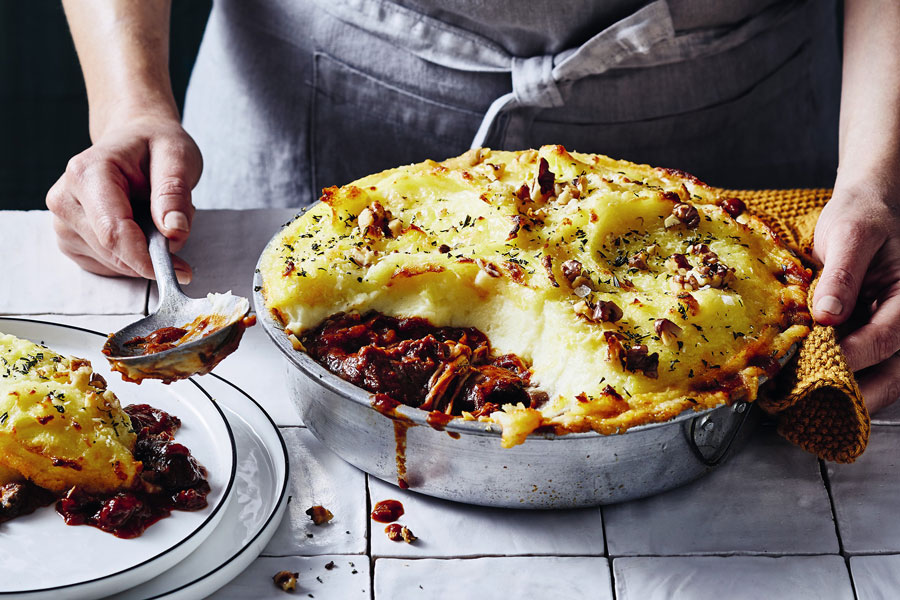 As a child, chef, author and TV personality Justine Schofield was infatuated with food; an obsession she attributes to her French heritage. “Food is life,” she says, “and it was ingrained in me as a young child that eating well is one life’s great pleasures.”

It’s the vivid memories of watching her grandmother and mother navigating the kitchen “so seamlessly” that have propelled Schofield to pursue a life ensconced in creating food. From her early days on the first series of Masterchef, where she made it to fourth place, to the nearly 700 episodes of her Network Ten cooking show, and the four best-selling books she’s produced (including her latest, “The Slow Cook“), Schofield is firmly established as a crowd favourite in the Australian food scene. And so are her easy-to-made and easy-to-consume recipes.

Here she shares her favourite winter comfort food recipe, Eggplant and Mushroom cottage pie; a vegetarian version of the classic meat-lover’s dish. (Challenging non-vegetarians is somewhat of a hobby for her.) “I’ve tested this a few times on my meat-fiend friends, without telling them they were having a vegetarian meal,” she explains. “They were completely blown away by the mushrooms and the eggplant ‘imitating’ meat.”

Schofield admits that each season encourages her to try new dishes and to react to the way the weather makes her feel. “When the winter weather rolls in, the gears change on my style of cooking,” she says. “From fresh salads to hearty and rich dishes like cottage pies which are usually meat-based. This year, I wanted to take that concept and give classic winter dishes like this a veggie makeover without sacrificing on flavour. The main aim was to get all the meat lovers out there to enjoy this recipe just as much as a traditional cottage pie.”

“We usually associate a hearty cottage pie with a meat filling but eggplant and mushroom make a great vegetable substitute,” explains Schofield. “This dish is not only loved by my vegetarian connoisseurs but by my meat-loving family and friends too.”

Follow steps 1, 2 and 3. Pour the mushroom mixture into the slow cooker along with the eggplant. Season with salt and pepper, cover and cook on high for 4 hours or on low for 7–8 hours, or until the ragu is thick and rich.  Follow steps 5, 6 and 7

This recipe and other tasty recipes can be found in Justine’s latest book, The Slow Cook by Justine Schofield, Published by Plum ($39.99), Photography by Rob Palmer.