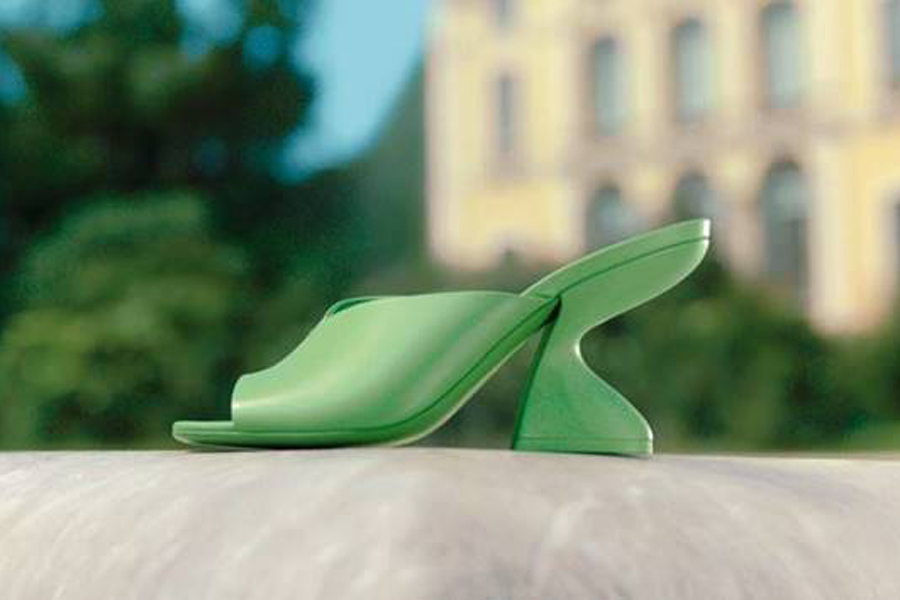 The Salvatore Ferragamo S/S 2021 show was heavily influenced by designer Paul Andrew’s lockdown viewing of Alfred Hitchcock’s back catalogue. “This spring, stuck at home, I re-watched classic Hitchcock, in particular Marnie, The Birds and Vertigo,” says Andrew. “In the past, watching those movies has always felt like inhabiting a surreal and strange world. But watching them during lockdown was different – they felt like ‘real life’ because ‘real life’ itself had suddenly become so strange, surreal and oddly beautiful.”

As a result, the S/S 2021 collection’s palette was drawn from the Technicolour tones of Hitchcock’s iconic films, with pieces rendered in shades such as Hedren Green, Vertigo Mauve, Bodega Bay Sky and Gull Grey, and the show was accompanied by an eerie, Hitchcock-esque short film by Italian director Luca Guadagnino.

It was fitting that this collection included the reimagined F-shape heel, the famous Ferragamo shoe design that makes the wearer look as though their foot is floating above the ground. Beautiful, yes, and ever-so-slightly surreal. “The F-shape heel is one of Salvatore Ferragamo’s greatest inventions. It defies the eye’s perception of gravity and leaves the foot seemingly suspended in space,” says Andrew, who has been the women’s footwear design director at the fashion house since 2016.

Ferragamo himself designed the original F heel in 1947, and legend has it that the silhouette of the shoe was inspired by the stern of the ship on which he sailed from America to Italy 20 years before. The unique design won him the Neiman Marcus Award for Distinguished Service in the Field of Fashion, one of the highest honours in the industry. “Alfred Hitchcock once said that ‘ideas come from everything’,” says Andrew. “I love the story that our founder formed the idea for this beautiful, delicate, and totally counter-intuitive design by observing the curved stern of the ocean liner on which he steamed home to Italy from his days as shoemaker to Hollywood’s greatest stars in the US.”

Andrew first resurrected the F-shaped heel four years ago in the autumn 2017 collection, his first with the label, when he released a black suede and velvet shoe boot with lacquered gold heels. Several equally arresting iterations have followed. “I’ve been honoured to work with this shape for Salvatore Ferragamo on and off since 2017, but this season it seemed especially perfect. It embodies the sense of stylish suspense the collection transmits, and the rich bold colourways of the Technicolor palette highlight its incredible architecture. I set out to create a modern sequel to Ferragamo’s timeless classic that adds new layers of sustainability and technical innovation to his brilliant original.”

This sequel is crafted in nappa leather in two of Andrew’s Hitchcock-inspired colours – Hedren Green and Technicolor Yellow – and a third is made of black nappa punctuated by pearl-like beads. For the first time, the shoes are monotone, with the upper, lining, sole and rubber heel lift all presented in seamless Technicolor or black, expertly clad in a single piece of nappa by Ferragamo artisans.

“[This design] is a true classic that will long endure as a bedrock of Salvatore Ferragamo,” concludes Andrew. “Every generation that comes to it is captivated by that shape, and every woman who wears it immediately discovers another aspect of our founder’s greatness: he was obsessed with fit and feel.”