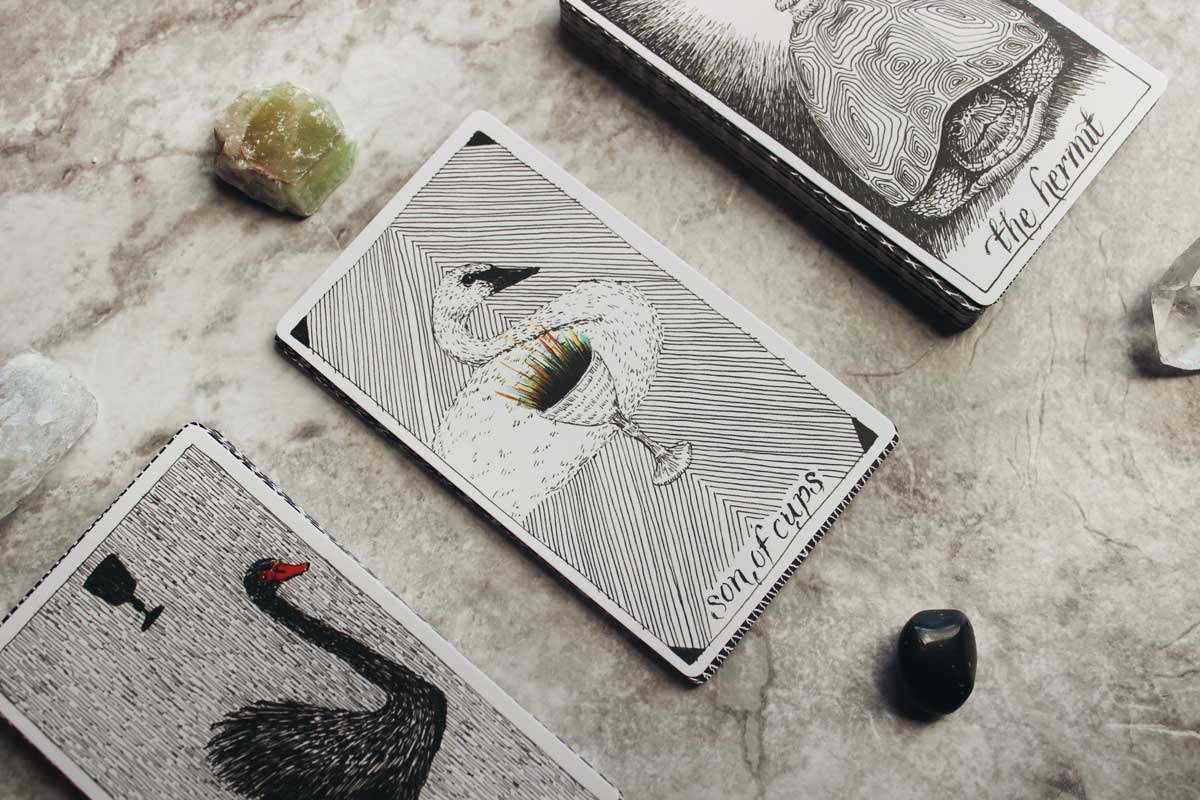 Tarot cards are thought to have originated in Italy in the 1430s. Photography by Jen Theodore.

As 2021 rounds out to be just as unpredictable as its predecessor, more and more of us are reaching out to the mystical for answers. Some have dived into their birth charts, others have dabbled with numerology, astrology and Human Design. But the hottest spiritual trend of all is drawing tarot cards as a way to seek guidance and reassurance.

We needn’t consult an oracle to see why, as Jerico Mandybur, a bestselling author and the creator of the Neo Tarot deck, explains. “These are troubled times and people really don’t have the security or the safety net of mainstream religions anymore,” she says. “Things like tarot are very suited to an individualistic culture, for better or for worse.”

As we turned our collective gaze onto the otherworldly, so it was that, ever tuned into the zeitgeist, Dior launched its spring 2021 haute couture collection and accompanying film, “Le Château du Tarot”, by “Gomorrah” director Matteo Garrone.

The 15-minute film opens with a young woman in a classic Dior “Bar” jacket being given a tarot reading. As her first card is turned over — “La Papesse”, the High Priestess — she is handed a key and enters the dreamlike world of the tarot.  Wandering around the chateau — actually the Castle of Sammezzano near Florence, Italy — she embodies two different versions of herself as she meets characters from the major arcana including the Fool, the Hanged Man, the Devil and the Star, before merging into one person, perhaps her true self.

The film showcases the new collection in all of its vibrancy, from light, whimsical silk chiffons to rich devoré velvets, twill chenilles and jacquard, all of which honour its Renaissance inspiration, the Brera-Brambilla tarot deck. Maria Grazia Chiuri, Dior’s artistic director, is no stranger to the arcanas, having woven elements of the tarot into her work for the house since her debut collection, spring 2017, which featured evening gowns embroidered with tarot imagery. The next year, for resort 2018, she made tarot a central theme again, only this time leaning on the feminist Motherpeace deck for inspiration.

“Tarot cards are among the keys to accessing the magical realm, to explore the unknown while fearlessly looking deep inside oneself … In uncertain times marked by a palpable desire to reconnect with the world’s soul, Maria Grazia Chiuri wished to explore the mysterious and pluralistic beauty of the tarot in a series of dresses featuring virtuoso constructions,” the fashion house stated in their press release.

Chiuri’s tarot totem marks a full-circle moment for the fashion house, looping back to the fascination Christian Dior himself had with the cards. It’s well known that Dior was superstitious. In “The Story of Dior”, the house states that he had “inherited his grandmother’s strong taste for the art of divination, fortune tellers, signs of destiny and premonitions”. He sewed sprigs of lily of the valley — his “lucky flower” and a French symbol of good luck and happiness — into the hems of garments for his fashion shows in an effort to will his creations into success.

The man who once wrote “Chance always comes to the aid of those who really want something” also kept close friendships with fortune tellers and is said to have had his tarot cards read before each catwalk show. Monsieur Dior also often consulted his favourite psychic, Madame Delahaye, to try to glean information about his sister Catherine during World War II. A member of the French Resistance, she had been deported to Ravensbrück concentration camp and Delahaye correctly predicted that she would survive.

These rituals were combined with an interest in astrology (Dior was an Aquarius) and an awe of the magic of numbers. For him, the important numbers were 13 and eight. Thus 13 models were cast in his shows and his fashion label was officially founded on October 8, 1946. “In times of uncertainty, just like those that Monsieur Dior experienced during the war, any reference to auspicious magic conveys security,” said Chiuri in the Zoom meeting that preceded the unveiling of the new haute couture collection. “I don’t believe that the tarot is divinatory, but simply that the encounter with the major and minor arcana helps one to analyse one’s thoughts and allows one to make choices.

Mandybur concurs, suggesting that tarot can be a powerful tool “for anyone who feels on the margin”. It can, she argues, be a way for them to “empower themselves and their own personal lives, but also to express themselves creatively, maybe in a world that they don’t have the means to do so in other, so to speak, ‘straight’ ways. What makes tarot so powerful is that it gives us a different perspective. It goes beyond our own personal biases. We might think we know the answer, but because it’s randomised, you’ll get a card and it offers you a totally different perspective that you wouldn’t have thought of because you’re in your own storylines.”

“To make the most of that, it’s important to ask questions that empower you,” she adds. “This is a tool for showing yourself love and compassion and curiosity.”