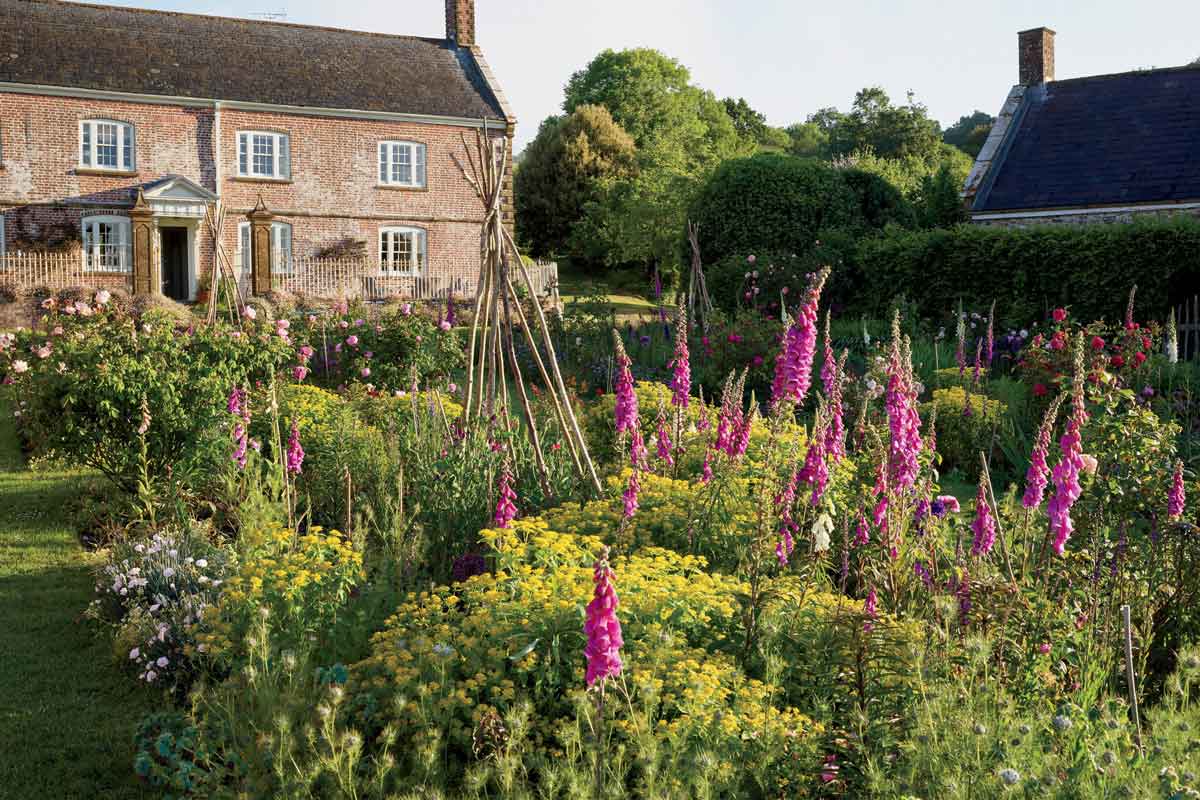 A view of Bettiscombe Manor, the designer’s brick house, from the garden. Photography by Simon Upton.

Among Jasper Conran‘s most precious possessions is a signet ring given to him by his mother. Engraved with the Conran crest — a dove perched on two crossed snakes — it bears the motto “In peace lies wisdom”. A lovely sentiment, to be sure, but considering the polymathic British designer’s wildly accomplished and famously unpeaceful family, it’s easy to infer a bit of classic English irony in the gift.

Jasper’s father, who died in September at 88, was Terence Conran, the man who upended fusty British postwar design in the 1960s with his empire of Habitat stores, which introduced minimalist housewares and Scandinavian-style flat-pack furniture to the British high street. In 1973, he opened the upscale Conran Shop on Fulham Road in Chelsea, and in the late 1980s moved the store down the street to the old Michelin House, an Art Nouveau jewel, where it still stands today. There he continued to reshape the retail landscape, staging modern furniture by the likes of Charles and Ray Eames and Ludwig Mies van der Rohe alongside traditional French cookware and global crafts. (There are now Conran Shops in Paris, Tokyo, Fukuoka and Seoul, and additional London locations at Selfridges and in Marylebone.) Over the course of Terence’s career, he also founded London’s Design Museum, a homage to graphic, fashion and industrial design, and opened more than 50 restaurants, including the still-popular Bibendum on the ground floor of the Michelin building, which ushered in the city’s era of modern cuisine and high-ceilinged brasseries when it opened in 1987.

Jasper, 61, is the second of Terence’s five children. His mother is Shirley Conran, a best-selling author of steamy blockbusters, including the 1982 “Lace.” (Shirley was the second of Terence’s four wives; they divorced in 1962, when Conran was 2 and his brother Sebastian was 5.) When Jasper wasn’t at boarding school, he was shuttled between his mother’s series of London flats and the 58-hectare Barton Court family estate in Berkshire, which his father purchased in the early ’70s. There was also a farmhouse in Provence.

It was a complex and tempestuous childhood, but a creatively fertile one, as well; Jasper, Sebastian and their younger half sister, Sophie, all became designers. After completing his O-levels, Conran came to New York to study at Parsons School of Design, and at 19 debuted his first collection, a 10-piece line of wedding dresses for the now-defunct Manhattan department store Henri Bendel. In the ensuing years, his output has approached that of his father’s. In addition to his namesake women’s wear label and J by Jasper, a diffusion line, he has created bone china for Wedgwood and costumes for more than a dozen ballets, operas and theatrical productions, including the Royal Ballet’s 2019 production of Christopher Wheeldon’s “Within the Golden Hour.” In 2011, the board appointed him creative director of the Conran Shop; a few years later, after his father stepped down, he was named chairman of Conran Holdings. He worked to return the stores to their original glory until 2015, when he resigned in order to focus on his own lines. The Conran Shop was sold in 2020 to the British entrepreneur Javad Marandi, who has a large real estate portfolio in the UK, including the 40-hectare property on which the Soho Farmhouse, the Soho House chain’s Oxfordshire retreat, is located.

His father often wielded his brilliance like a blade (in his 2001 book “Q&A: A Sort of Autobiography,” he described himself as “ambitious, mean, kind, greedy, frustrated, emotional, tiresome, intolerant, shy, fat”), but Conran is known for balancing the same sort of aesthetic energy with a generosity of spirit. Still, he has experienced a certain inherited restlessness over the years that has led him to buy and sell a series of residences in the UK and abroad, turning each into a canvas for his signature style: a mix of English antique furniture and 16th-, 17th- and 18th-century art with an almost austere neutral palette, offset with deft slashes of colour. “It’s no secret I’ve owned a lot of old houses,” he says a bit sheepishly. “I’ve dreamed of them since childhood, when my mother used to take me round to see all the dilapidated great ones. I always wondered: ‘What has happened here? What are the stories?’”

He has possessed at least six, all of them historically notable. Perhaps the most spectacular was Ven House, a Grade 1 listed 18th-century manor in Somerset that he bought in 2007 and sold in 2015, and a 7,000-square-metre apartment that makes up much of New Wardour Castle, a limestone Palladian mansion in Wiltshire. He also keeps a flat near London’s Hyde Park and a residence made from two ship captains’ houses on the Greek island of Rhodes.

But the place he considers home these days is refreshingly (and relatively) modest: Bettiscombe Manor, an intact early 17th-century brick house on 28 hectares in Dorset, a corner of the southwestern English countryside that retains some of the untrammelled wildness immortalised by the 19th-century novelist Thomas Hardy. Until he bought it four years ago, the house was owned by his stepmother, Caroline Conran, a food writer who was married to his father from 1963 until 1996, and who was instrumental in the creation of Habitat. She purchased the house as a weekend refuge for herself in 1986. While Jasper and his own mother have had a fractious relationship over the years — he reportedly did not speak to Shirley for more than a decade, until shortly before his 2015 wedding to the Irish artist Oisin Byrne, which she attended — he and Caroline have always maintained a deep and durable bond. “She was probably the biggest influence on me,” he says. He visited her often at Bettiscombe through the years — “I always considered it an impossibly magical place” — but until she told him she wanted to downsize in 2015, he never imagined it might be his. “I wasn’t looking for another house, but this isn’t just another house,” he says.

Virtually unchanged over 400 years, the manor has a far more human scale than the projects he is known for. Creaky, cosy and atmospheric, it has wide-plank floors covered in rush matting, a scullery with a Belfast sink skirted with linen and a cabinet that once held powdered wigs. Its last full renovation was during the reign of William and Mary, and when his stepmother bought it from a tenant farmer, there was no central heating.

Conran has reimagined it with his usual restrained panache. In front of a mantel-less fireplace sit a pair of white linen-upholstered George II armchairs with mahogany legs the color of burnt molasses; a needlepoint of a Welsh manor in a carved gilt frame — bought on his 21st birthday — hangs alone on a pale wall above a cushy white sofa strewn with violet pillows from Morocco. (In 2016, he opened the riad inn L’Hôtel Marrakech.) But it is the garden that perhaps best expresses how Conran has — as the family crest counsels — finally found wisdom in peace.

Unlike the formal gardens at Ven House, with their clipped all-green symmetry and stone fountains in the 17th-century style, the grounds of Bettiscombe tend toward the natural and the profuse. They seem a reflection of the unfussy rural character of the area — and of Conran’s evolving disinterest in anything too palatial. There are chickens. A shepherd brings his flock of sheep to graze daily. Conran employs just one full-time gardener, unlike the robust staff that were needed to keep his grander properties in order. “This is a different time of my life,” he says, recalling the partying he did in his younger years that was assiduously documented by the British tabloids, “and I’m feeling so comfortable and full of joy.”

Unlike the interiors, which evince his willingness to ruthlessly edit in order to let good pieces have breathing room (“I don’t do layering,” he notes), the garden here borders on the riotous. “It’s my id run away with me,” he says. During the pandemic, his desire to be enveloped by bright hues, the sweet fragrance of flowers in bloom and organic shapes has intensified: “Just being in the midst of that and seeing every day when you go out what has happened overnight is so exciting.”

The sense of purposeful imperfection begins as you leave through the front door to walk down a stone path: poofs of erigeron — fleabane — with tiny daisy-like flowers fizz from between ancient stones. The ornamental beds themselves, bisected by grassy promenades, are densely planted, the colours molten. In late spring there are parrot tulips everywhere, and the belled stalks of purple digitalis burst through blossoms of yellow euphorbia.

As the season mellows, the dahlias emerge, their nodding heads sometimes the size of Frisbees. Even in December, the garden bears flowers: Helleborus niger — Christmas roses — with their blowzy blossoms in faded Victorian shades of lavender and sage. There are a cutting garden, a vegetable garden and a greenhouse. Conran pulls fresh peppers, leafy greens and peas from the vines to serve with poached chicken drizzled with aioli; his guests drink chilled Meursault as they sit at the graceful, aged iron tables he has arranged in clearings.

Less than 100 metres away, near the orchard, Byrne, 37, has set up his studio in the 1830s structure that houses the apple press, still used each autumn to make cider. His works over the past year at Bettiscombe, mostly large-scale botanicals with a lush, exuberant edge, have grown even bigger and more vivid. Conran cuts lavish bouquets for him to paint, a gesture of quiet intimacy. “I’ve had my drama and my houses,” the designer says. “Now I feel as though I’ve landed.”

A version of this article appears in print in our third edition, Page 132 of T Australia with the headline:
‘The Wild Life’
Order a copy | Subscribe