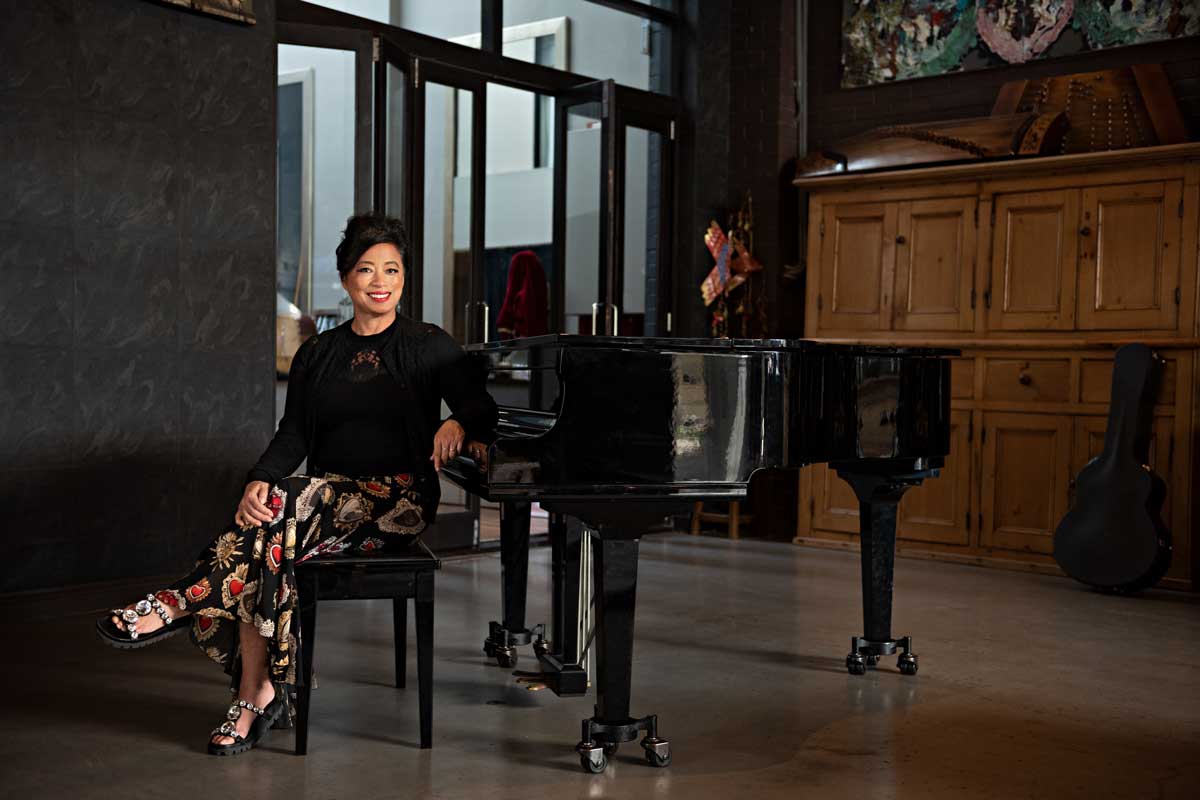 Jane Barnes is surrounded by musical instruments at her warehouse conversion in Sydney. She is determined that all of her grandchildren experience the joy of learning to play the pian. Photography by Tony Amos.

In 2020, when many people slowed down, Jane Barnes learnt to play 100 songs on the guitar. She also performed daily Facebook concerts with her husband, Jimmy, and co-wrote a cookbook with the rock legend. In between, she tended a vegetable garden and regularly cooked for a tribe of family members at her home in the Southern Highlands, New South Wales — a tribe that includes an ever-increasing number of grandchildren (15 at last count). “If I sit around too long, I literally get sore bones, so I’m always moving,” says Jane, who’s dressed in a black cardigan, a silky Dolce & Gabbana skirt covered in hearts and a pair of bejewelled Miu Miu slides.

She and Jimmy have just returned from New Zealand, having travelled on the first flight to operate under the trans-Tasman bubble. They arrived there just in time for the birth of their newest grand-child, Theodore. We meet at their Sydney home, a converted warehouse in the city’s southeast. Downstairs, a big country-style kitchen leads to a recording studio and a rumpus room full of kids’ books and toys, including an old rocking horse and a child-size BMW convertible. A drum kit, grand piano and various guitars are scattered throughout the other rooms, along with Buddha statues and a shrine to the Mushroom Records impresario Michael Gudinski, who died in March.

Throughout their 40-year marriage, Jane has been not only Jimmy’s muse, but also his creative partner and the glue that keeps their family together. They have four adult children (Mahalia, Elly-May, Eliza Jane [“EJ”] and Jackie) and Jimmy has three children from previous relationships (David, Amanda and Megan). The grandchildren range in age from 30-year-old Tabitha to baby Theodore. Jimmy also has two great-grandchildren.

The family’s rock ’n’ roll lifestyle is far from typical (Jane and Jimmy are frequently on the road for shows and holidays, often with the kids and the extended family — a cohort that can include more than 20 people) but Jane is, in many ways, a traditional grandmother (“Always in the kitchen at the stove,” she says). “When I travel and have to fill in the form that asks ‘What is your occupation?’ I put ‘Wife, mother, grandmother.’ Because that’s what I think is probably one of the biggest jobs anybody can have.” Granted, not many grandmothers can play the electronic bagpipes.

Jane was born in Thailand and migrated to Australia at the age of five after her mother, Kusumphorn, married a diplomat, John, whom she met at the Australian embassy in Bangkok. Jane’s maternal grandfather, Khun Gong, was a wealthy merchant who had seven wives and 26 children. Her grandmother, Khun Yai, was his fourth wife.

The Barneses have a home in Thailand and visit at least twice a year (“Jimmy loves it there,” Jane says. “No-one hassles him.”) But while Jane maintains a strong connection with her Thai family, the grandmother who had the greatest influence on her is John’s mother, Violet, who was “welcoming and loving” when Jane, her two sisters and her mother arrived in Canberra in 1963.

She describes Granny Violet as a “big softie” who, she says, “helped to bring us up as Australians with Australian values”. It was her plain Western cooking — Sunday roast, grilled cheese, and scones with home- made jam — that Jane remembers most. One of her recipes, for Irish shortbread, features in the Barnes’ cookbook, “Where the River Bends”, to be released in November.

In Thailand, Jane says, extended families live together, which means there’s always someone on hand to help with the children. It’s a tradition she has tried to maintain. She and Jimmy have been living with their six- year-old grandson, Dylan, while his parents build a home across the road from theirs in Berrima. Meanwhile, Jane’s sister Kaye, an artist, can often be found in the gallery attached to the Barnes’ Sydney warehouse.

Her other sister, Jep, is married to the singer/songwriter Mark Lizotte (“Diesel”), who sometimes jams with the family band and helped Jane with her guitar lessons. “We have family dinners every Sunday when we’re home,” Jane says. “There will be 30 of us, with the kids running around.”

Jane is always happy to help out with the children. “I’m really good with them when they’re really tiny,” she says. “I can always put them to sleep if the parents are getting a bit flustered because they’ve been crying a lot or they’re overtired. I’m a baby whisperer.” She and Jimmy often drive the grandchildren to school, Saturday sport and dance classes. One thing they insist on is that each child learns to play the piano. “We like to keep them busy, and why not learn music? Because it’s the language of the soul,” Jane says. (The next generation is already showing promise. Mahalia’s daughter, Ruby, 12, is a gifted singer.)

As she reflects on her life, Jane says that in many ways she’s still the university student who met Jimmy before a show in Canberra in 1979. “I’m a very positive person — that has remained with me,” she says. As for her big, messy, loving extended family, she says: “I feel I could die happy because we’ve raised kind people.”

A version of this article appears in print in our second edition, Page 94 of T Australia with the headline:
‘Next-Get Nannas’
Order a copy | Subscribe