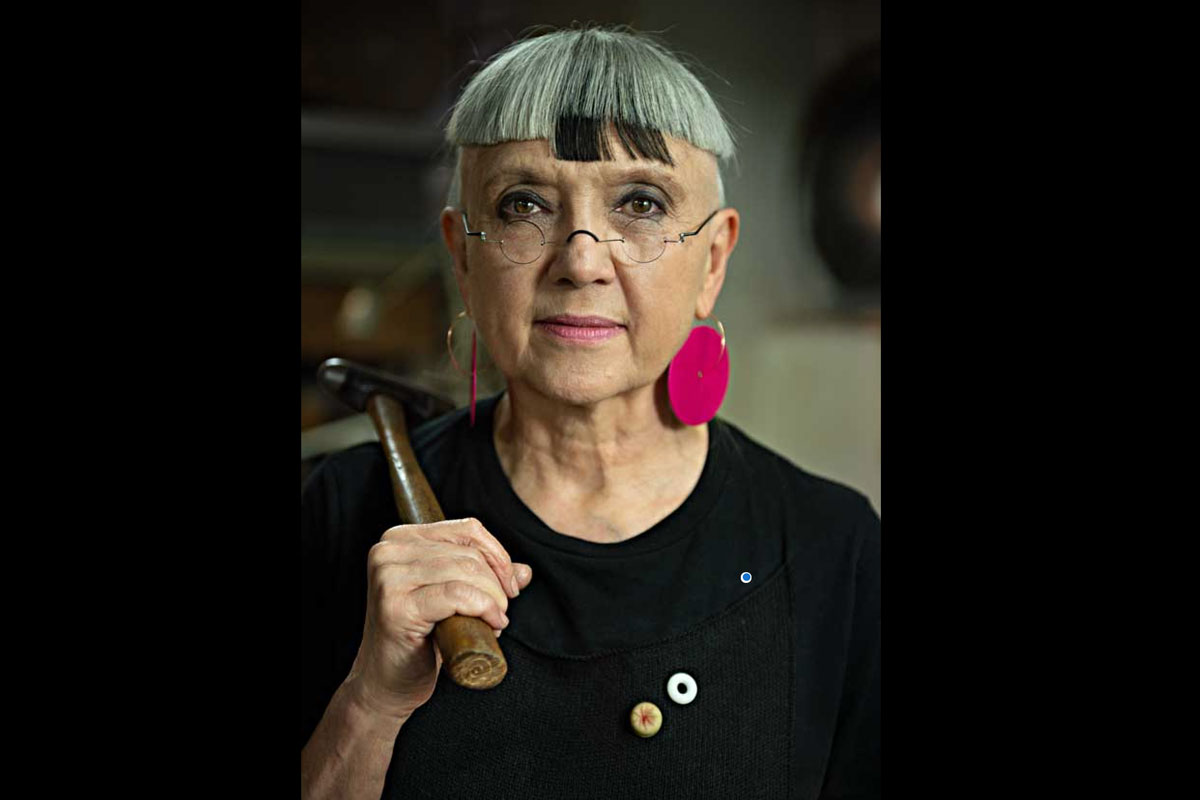 Su san Cohn, holding her metalworker’s hammer, in her workshop on Flinders Lane in Melbourne. Photography by Tony Amos.

“Have you always been a bit strange, Cohn?” the jeweller and metalworker Su san Cohn was once asked by her youngest granddaughter, Alba. “Yeah, I think so, darling,” Cohn replied. Few grandmothers wield a hammer as expertly as Cohn or spend long hours in a basement among anvils and lathes, banging metal and twisting wire. Few children, when they visit their grandma, get to go shopping for precious metals and tools. “Think of what you think a grandmother is and think of the opposite, and that’s my grandmother,” Alba tells her friends.

There’s also the non-traditional term of endearment: Cohn. She explains: “My artist name is Cohn Artist, as in ‘con artist’. They said to me when they were really little, ‘All your friends call you Cohn. We’re your grandchildren, we have the right to call you that too.’ I was delighted.”

Cohn is in her workshop on Melbourne’s Flinders Lane, beneath the Anna Schwartz Gallery. It’s full of heavy-duty machinery and works in progress. She is dressed in her signature black, which enhances her mesmerising hair, an abstraction of grey and black, and a far cry from the blue rinse. She says it’s crucial that women continue to shatter media expectations of older women. “I’m a woman in my 60s and I just keep pushing it,” she says. Then again, few women are grandmothers at 36.

Cohn became a mother at 18 and her son, Simon Denton (the restaurateur behind Melbourne’s Izakaya Den 2029) became a father at 18 to daughter Talia. Cohn’s own mother had her at 18 too. (When Talia, now 30, turned 18, the family was watching her closely, Cohn jokes.) Cohn was at university when she fell pregnant and though she had to drop out, she says having Simon was “the best thing I ever did. It gave me so much: someone to love, someone to care for. We kind of grew up together.”

She raised Simon in a converted warehouse in inner-city Melbourne with her partner of 45 years, the architect John Denton. The parents of Simon’s friends always knew where their kids were: “Invariably, at our place,” Cohn says. She adds: “I was building my career then, so my focus wasn’t so connected. John was the one who was more connected to him in some sense. And I regret that. I regret that I didn’t pay more attention. John saved both of us in a way.”

Cohn never knew her father’s mother, who was Japanese (something she discovered at the age of 12). She doesn’t know her name and continues to search for it. Her grandfather, Abraham, who was Romanian, studied medicine in Nagasaki between the wars and fell in love with a Japanese woman. Their relationship wasn’t approved of and the couple eloped to China. Sadly, Cohn’s grandmother died not long after giving birth to Cohn’s father. Abraham married again, to a Chinese-Russian woman, Gita, and her father was raised as if he were part Chinese, as it was considered shameful to be Japanese in China during and after World War II. The couple separated after the war; Abraham stayed in China and Gita migrated to Australia and remarried.

“She was a big, bossy woman — all embracing,” Cohn says. “And she was a fabulous cook. At Russian Easter, you had to grab as many friends as you could because there was so much food. I identified very much. She was very strict — strict in a loving way.”

Memories of her other grandmother, Muriel, are not so fond. Cohn’s early years were complicated. As a teenager, she was taken in by Muriel, who lived in Sydney, but Cohn ran away and lived on the streets for three years. Muriel had given her an interest in culture, taking her to the library, theatre, ballet and art galleries, “but she was an awful woman. She was very controlling,” Cohn says. It was on the streets that the teenage Cohn developed her talents as a jeweller, producing wares that were not just decorative. “I was one of a group of girls and we would look out for each other,” she says. “We would use our jewellery to signal to each other. You’d twist a ring or move a ring from one hand to the other, meaning, ‘This is dangerous, we’ve got to get out of here.’ It was a survival code.”

Eventually, after “a couple of really bad experiences”, Cohn pulled herself out of that life. She enrolled in university in Melbourne and had Simon, then found work in a graphic-art studio and started a jewellery course. Since then, she has become one of Australia’s finest jewellers and metalworkers (she was the first Australian to design for Alessi, creating a steel fruit bowl that has been in production since 1992).

Cohn’s early life has given her insights that few grandmothers share, and the grandchildren know they can confide in her. “I’ve been fortunate to develop that connection where they come and talk to me. And they know it’s just between us,” she says. Cohn’s eldest grandchild, Talia, lives in Sydney, and Talia’s half-siblings, Alba, 16, and Orlan, 14, are in Melbourne. The three generations (and often friends too) regularly gather around the table at Cohn and John’s Melbourne warehouse. “I’ve always worked at keeping everyone connected so the grandkids could see there was no need for animosity,” Cohn says. “I’m the central thing that brings everyone together.”

A version of this article appears in print in our second edition, Page 94 of T Australia with the headline:
‘Next-Get Nannas’
Order a copy | Subscribe