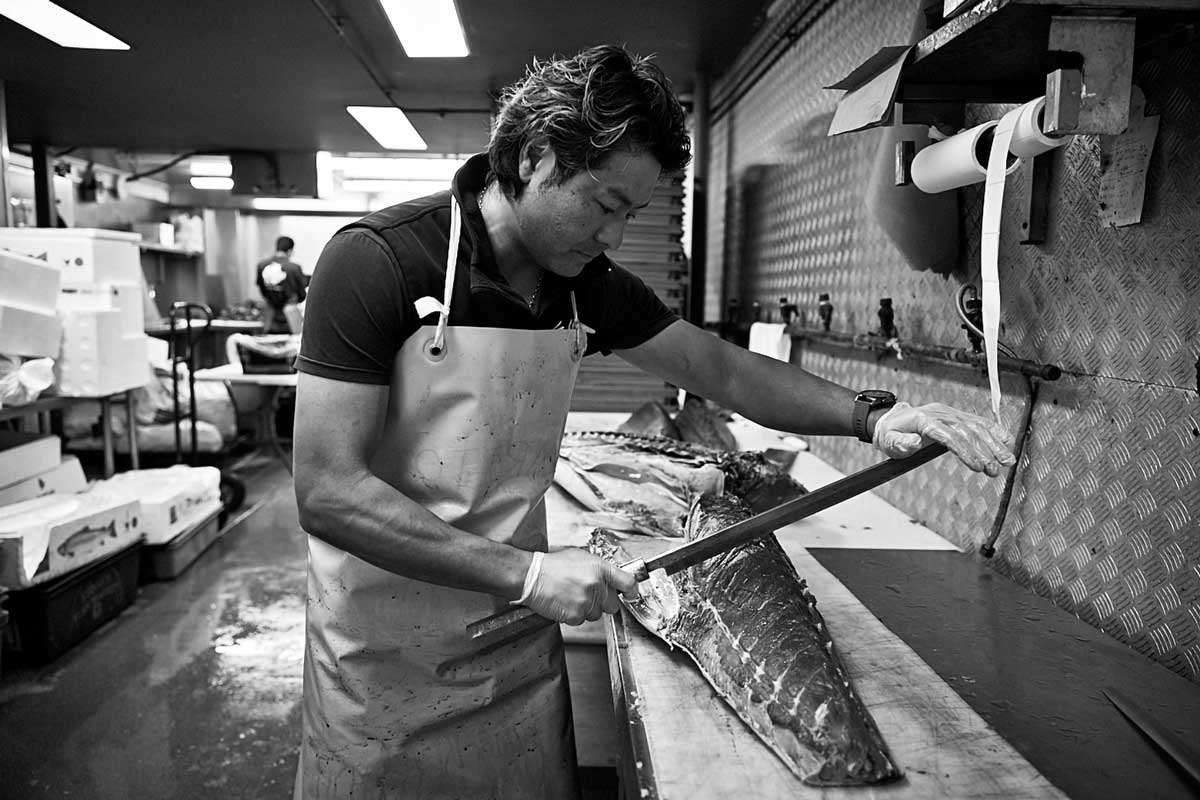 The fish handler Narito Ishii slices through a belly loin with a specialty knife known as a maguro kiri bocho. Photography by Rob Palmer.

Before this tuna lay cold on the bench, it swam laps across the Pacific, around Australia and New Zealand, up the coast of Mexico and back through to the Arafura Sea, where it was spawned. An annual migration of about 15,000 kilometres, done at speed, its torpedo shape cutting through the ocean, gills pumping seawater. By the time it came to rest here, it would have made the loop two, maybe three times — enough to pack on kilos, but not enough to reach maturity — until somewhere off New Zealand it snagged on a longline or found itself encircled by seine nets. Its brain would have been spiked, a wire run down its spine to stop the nerves firing and ice packed around its body. When it finally landed at Sydney Fish Market, tuna buyers would have pored over it in the early morning at auction, Narito Ishii making the winning bid.

Now, hours later, Ishii stands over the fish in a packed room. The crowd, here for a charity cutting show and auction, is baying for toro. Music pumps as Ishii readies his knife. “My name is Narito,” he says, then gestures to the man standing next to him. “And this is a superstar sushi chef from Sushi Oe.” Alongside him Toshihiko Oe, who runs a six-seat sushi counter in Cammeray in Sydney’s north, flashes finger hearts around the room. When the auction starts, frantic bidders will pledge thousands of dollars to get a taste of the choice cuts. “No sushi no life” reads Ishii’s T-shirt, and as he hoists a bluefin loin into the air, it’s met with wild applause.

Few, if any, fish handlers hold this level of public affection (in fact, few suppliers do at all, unless your name is Dario Cecchini). But for Ishii, this warm glow of attention reflects onto him from a close network of Sydney chefs, each with their own intimate omakase restaurants serving, among soup courses and palate cleansers, course after course of sushi to scores of fanatics who book their seats months in advance. While Attica might make a centrepiece of tomatoes and waiters at Quay might relay the provenance of purple corn, a supplier’s contribution to a meal at these restaurants might amount to a couple of bites. For these sushi chefs, the medium is just fish and rice. And for fish — their fish — there’s no-one better than Ishii.

Fishing, says Ishii, runs in his family, even if his father broke the streak. “My father’s brothers — there are five brothers — every one used to be a fisherman. Lobster fishermen, normal fishermen, their grandpa was a fisherman,” says Ishii. His dad, though? “He was a captain on a passenger cruise.” In Kagoshima, Japan, where Ishii grew up, boats frequently cast out from the southwest tip of Kyushu into the bay and beyond, under the shadow of Sakurajima, the city’s emblematic volcano.

Food wasn’t a particularly noteworthy aspect of Ishii’s childhood, but he has memories of his father cracking open wild sea urchins and spooning the roe onto rice for lunch. Rather than follow his family’s path, when he hit 19 Ishii moved to Tokyo. “I was doing so many jobs,” he says. “In Japan we call it ‘freeter’, which means you change job all the time — always part-time, never working permanently.” A few years later, in 1998, wanting to learn English, Ishii weighed up a move to the United States, but instead chose Sydney. There he scored a delivery job for a seafood wholesaler that supplied Japanese restaurants, and developed long, sometimes painful, relationships with some of the city’s best Japanese chefs.

John Susman, a veteran seafood consultant who has worked with Ishii for nearly two decades, thinks his timing couldn’t have been better. “We had this explosion of Japanese food in Sydney 20 years ago,” he says. “So Narito’s certainly been mentored and tutored — and probably beaten — by some of the best Japanese chefs in Australia over that period.” Beaten isn’t far off the mark. “All the chefs were like that, screaming at me if a delivery was late or something,” says Ishii. “But now, they’re my friends. They taught me, actually, how to be like me now. They were very strict, but now I’m really thankful.”

These days the roles are reversed, with Ishii having built his own company, employed his own buyers and then stepped into a position with a parent company with which he maintains his local clients and also grades tuna for export. The knowledge he has accumulated, the relationships he has built and the sheer tonnage of fish he has cut and tasted have established him as the country’s foremost expert on Japanese-style fish.

“I rate him very much as probably the tuna master of Australia,” Susman says. “He really does have an intimate knowledge of, but also an intimate love for, that particular species. But I’d also say that he has a broad repertoire of knowledge across not just fish, but also shellfish.” Ishii posts the spoils of auction on his Facebook page; rich in their variety, they include blue mackerel from Wollongong, hairtail from Coffs Harbour and imperador from New Zealand. “There’s a whole suite of fish that would still probably be at the lower end of the demand cycle if it hadn’t been for the work that Narito had done with his posse of Japanese chefs,” says Susman.

The past 18 months have, more than ever, propelled omakase restaurants into the mainstream, with the demand for luxury experiences growing among those who can afford them, combining with Covid-19 rules that have seen restaurants that can cater to fewer guests, and charge more, flourish. Add to that the fact that some of the best local fish and shellfish are now being kept in Australia, and there has never been a better time to be in the sushi business. Or to be the guy supplying it.

Ishii comes alive in the company of the city’s best sushi chefs, relaxed and joking one moment (“I caught him playing Candy Crush once at the auction,” says Chase Kojima, the executive chef at Sokyo), deadly serious the next. And he’s at his most serious when he dines at his clients’ restaurants. “They’re really scared when I come. I want to know how they do my fish and if they’re using it the wrong way,” says Ishii. “When I supply fish, they can complain. But when I go to their restaurants, I pay money, so I tell them whatever I want.” Kojima confirms with a sharp nod. Wherever he goes, Ishii brings a discerning palate. A few hours after I first spoke to him, he texted me a line-up of empty bottles: rare Piper-Heidsieck, Krug, sake, a couple of 1986 Pauillacs. “Wine for tonight,” it read.

As a menu item, bluefin tuna is the thing that marks the climax of any omakase — first akami, the deep red part of the loin, then chu-toro (the centre, shot through with fat) and finally the o-toro (the belly). A few generations ago, sport fishermen had trouble selling tuna even for pet food, while in Japan, o-toro was often reserved for cats. Nowadays, these single slices of fish over rice are the thing diehards clamour for and chefs throw thousands at.

Place a piece in your mouth, taste the lightly seasoned grains of rice, the fish brushed with tare, and no matter your opinion on eating threatened species — and southern bluefin is among the most threatened, as much as Ishii and his clients might shrug and point to quotas and tagging systems — there’s almost no single bite that’s more revelatory, more purely delicious. It’s that moment that keeps Ishii and his clients in work.

It’s also what keeps Ishii getting up at 3am. The hope that no matter how many thousands of fish he’s cut, the next one will be better. “Even the same fish — today and tomorrow, it’s never, ever the same,” he says. “I’ve cut so many salmon that I don’t want it. But tuna, I can cut, cut, cut. The smell, the taste — it’s so good, I can eat it every day.” Ask him about the future and his thoughts turn to luring travellers from Japan to show off Australia’s sushi, and plans to open his own restaurant.

When Ishii cuts a tuna, he is both matter-of-fact and fiercely attentive. He starts with the tail, sawing it off to examine the bands of flesh where the four loins meet. A bad tuna, Ishii says, is dark and has a dullness to it, with little to no visible fat, whereas a good fish, usually also more rounded in the midsection, fades to white at the edges. He’s happy with what he sees, so he takes a filleting knife and slits the skin close to the dorsal fin, peeling off a strip and then running the blade along the spine to open up the back. After easing off a loin, he reaches for his maguro kiri bocho — a long knife with a wooden handle forged specially for tuna — then spins the fillet crossways, cleaves it and turns it to expose the flesh.

There are no words from Ishii. Just a glance, a sharp “hmm”, a nod and a gentle smile. This is a good fish.

A version of this article appears in print in our third edition, Page 86 of T Australia with the headline:
‘King Fish’
Order a copy | Subscribe