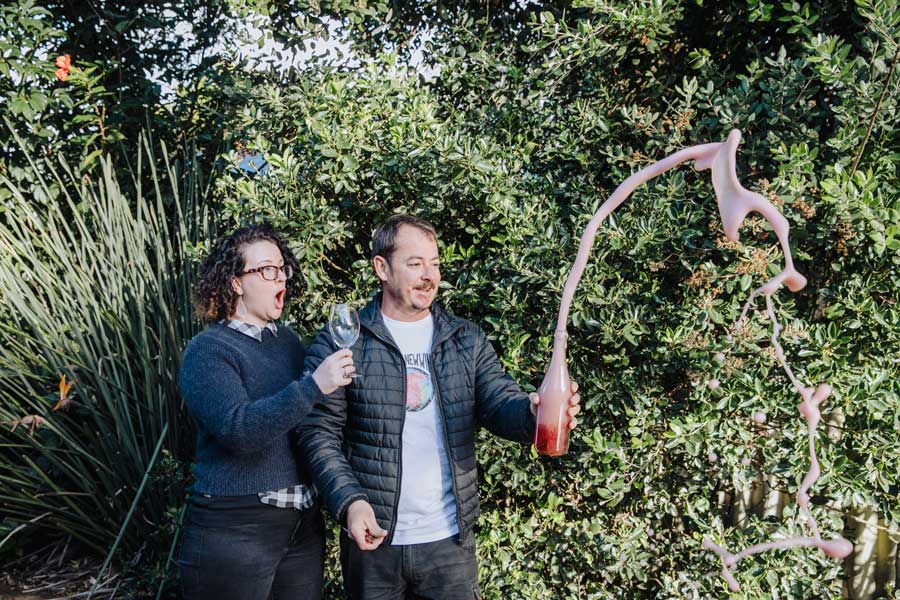 “Pi-Ou Pinot Noir”. “Sunshine & Hercules Riesling”. “Riot, Girl!” white blend. The names give up the game early. Brave New Wine are shaking up winemaking from a shed in Western Australia’s Great Southern. Over at LS Merchants, a few hours’ drive to the Margaret River region, winemaker Dylan Arvidson splits his time between the wine making shed, his brand-new cellar door and a deejay booth.

Brave New Wine and LS Merchants are part of a growing trend of winemakers who are serious about wine but don’t take themselves too seriously. They’re here to play with everything from grape varietals and winemaking techniques to bottle shapes, labels and names. Why? At Brave New Wine, winemaker Andries Mostert began small batch winemaking as an antidote to his commercial winemaking career, where wine styles are often dictated by marketing teams and the demand for consistent taste profiles every season.

Mostert and his wife Yoko Luscher-Mostert bottled their first vintage in 2013. They began with experimental small batches, to drink themselves and to swap with other producers. From the beginning, the focus has been on fizzy Pétillant Naturel (pét nat) styles and skin-contact wines – styles that are unconventional, experimental and according to the duo, fun. These days their line-up also includes easy drinking wines like Rude Boy, a grenache, shiraz, tempranillo and vermentino blend that’s light and low in tannin, designed to match Australian ways of eating and drinking. But it’s their avant-garde styles that have put them on the map.

“People are now seeking out wines that ten to fifteen years ago they would have turned up their nose at,” says Luscher-Mostert. “Cloudy wine, wine with sediment in it, just never would have sold.” Pétillant Naturel, French for “naturally sparkling”, is made by bottling wine before finishing its first fermentation for natural fizz, and skin-contact white wines have been fermented with the grape skins, which are usually removed before fermentation.  Both techniques produce big flavours you can drink young.

LS Merchants founder and winemaker Dylan Arvidson believes the pét nat is here to stay. “There’s an insatiable thirst for the pét nat right now,” he says. The style’s recent resurgence began with young wine lovers looking for experimental drops, but its popularity has only grown, “Interest first came from the hipsters,” says Arvidson, “Now it has transcended everything. We get forty, fifty, sixty-year-olds trying it. They’re confused about it, they want to learn more about it, but they love it.”

Arvidson’s 2020 Fools Gold pét nat launched late last year and sold out well before the end of summer. That’s not unusual for his wines, which are ubiquitous in Perth restaurants and bottle shops, but for a pét nat he was surprised. Like Brave New Wine, Arvidson is here to have some fun, starting his own label to make wine the way he wanted . With a pedigree that includes mentorship by prolific Margaret River region winemaker Mark Messenger, he has no shortage of traditional skills, but was inspired by local breweries to start punching out small batch experimental ranges. He’s a Liquid Surprises Merchant (LS Merchants for short). For him it’s all about dropping the pretention in wine making, finding wine you like and enjoying it.

Like Brave New Wines, Arvidson buys grapes from growers across the region and makes the most of the diversity he finds each season. “We don’t want ten wines that taste the same with a small amount of variance, we want you to be able to taste the site and the different varietals in each one. We’re trying to make wine that is well made, yes, but has expression and a sense of place.”

Arvidson puts an emphasis on approachability, steering clear of what he terms “show wines” or “trophy wines”. “Gone are the days when customers come in and ask, ‘is this a 95-point wine?’. They’re looking for wines they enjoy, they’re trying to connect with a brand they find relevant to them, that they can believe in, and ultimately it comes down to the glass: is the wine drinkable or is it not?” says Arvidson.

It’s an attitude Brave New Wines shares. In an industry where increasingly the model is pay to play, Mostert and Luscher-Mostert are more often than not refusing to play. Carefully choosing where they enter their wines for judging, they are favouring the likes of Young Gun of Wine over the somewhat incumbent James Halliday Wine Companion. “Young Gun of Wine are the new guard, they have their finger on the pulse and see the shift in what people are interested in,” says Luscher-Mostert. Established in 2007, Young Gun of Wine describe wine scoring as “the dark side of wine”, instead focusing on championing winemakers and educating wine drinkers.

Skipping wine shows hasn’t done either brand harm. With no marketing budgets, they’ve built avid followings on social media, a platform that allows them to reach their customers and bring them along on the journey from grape to bottle. Following LS Merchants on Instagram, you’ll see everything from Arvidson running the bottling machine to juggling life as a young dad. Over at Brave New Wine, photos show Luscher-Mostert hand drawing the latest bottle art (she does all of the brightly coloured, highly detailed illustrations, now sold as prints as well as labels), and Mostert trying out a clay amphora for wine fermentation. Followers might get to vote on a new wine name or get early access to pop up events. It’s instantaneous connection and it takes these winemakers out from behind the bottle and into customer’s lives. The drinker’s experience doesn’t start or end at the bottle shop. These new wave winemakers are building communities and changing taste buds, one bottle at a time.