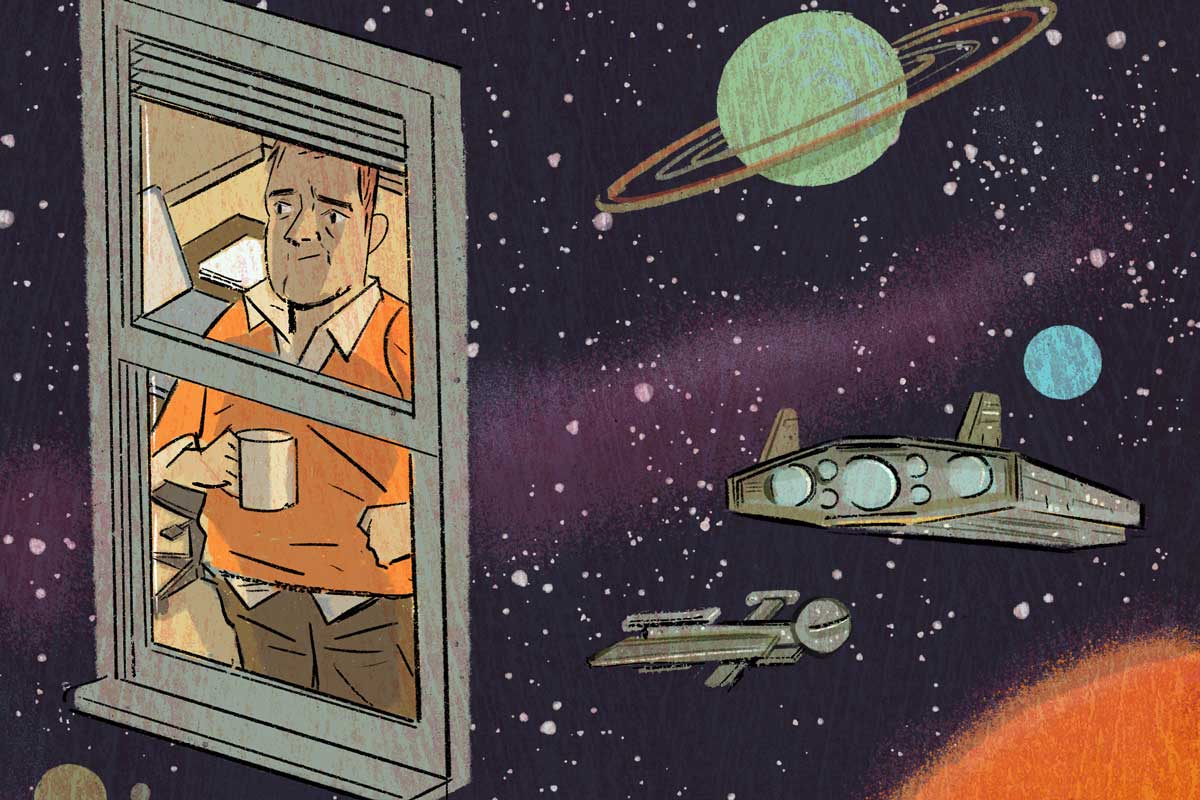 It’s a challenging time to be a science fiction writer. With many staples of the genre — from pandemics and intrusive technology to manned flights to Mars — moving from the realm of fantasy into reality. Illustration by Tom Jellett.

The novelist Sue Burke admits: “I didn’t predict the toilet paper.” In early 2020, as Covid-19 swept the world, the author was doing the final edit of her novel, “Immunity Index”, which depicted — of all things — an epidemic caused by a coronavirus. It was a rare opportunity for a writer to test their vision of the future against events as they played out in the real world. “I got a lot right about what would happen, but I had to write the toilet paper in at the last minute,” she says. Burke’s takeaway from the experience? “I won’t be writing near-future again. The future is closer than it looks.”

It’s a challenging time to be a science fiction writer. With many staples of the genre — from pandemics and intrusive technology to manned flights to Mars — moving from the realm of fantasy into reality, it is getting ever harder to create a vision of the future that doesn’t risk being overtaken by events.

Yet the speed at which reality is changing has made science fiction, and its insights into the potential futures that await, more relevant than ever. This can be seen in the ubiquity of sci-fi across television, movies and games, and also in the way that mainstream writers are embracing the tools and tropes once relegated to science fiction. “A lot of the boundaries that once existed between genre and literary writing are largely collapsed,” says the Australian novelist James Bradley. “All the major issues we confront as a society — climate change, surveillance, hyper-capitalism — are inherently science-fictional, and it’s difficult to write fiction now without addressing some of those.”

Bradley’s “Ghost Species” and “Clade” novels feel as if they are set about five minutes into the future. In the former, a tech entrepreneur makes the transition from modifying plants so that the species can cope with climate change to resurrecting Neanderthals. In “Clade”, Bradley serves up slices of a multi-generational family drama that plays out against a backdrop of unspooling climate change. Other Australian authors, such as Lucy Treloar (“Wolfe Island”) and Rohan Wilson (“Daughter of Bad Times”), have also set their stories in worlds that are close cousins of the one that we inhabit right now. In fact, over the past few years, many of the genre’s most interesting voices have been telescoping their focus. Rather than exploring far-distant planets, sci-fi writers are taking a fresh look at the world around them and questioning what future human societies will look like. In response to big shifts in environmental, economic and interpersonal realities, these writers are re-examining the basic precepts of society. The resulting works — a canon of new classics — are both wildly inventive yet horrifyingly believable.

At the novel’s core, however, lies the question of relationships, particularly those unbalanced by power inequalities — including the bonds between Eliasz and Paladin and between Jack and Threezed, an indentured human. Threezed and Paladin have been taught to serve, one through programming, the other through conditioning. As such, can their consent to any type of relationship be freely given?

The mechanics of power are currently a key concern for sci-fi writers. “Questions around the foundations of society, the exploitation of people, the process of social violence — that’s often rendered invisible in fiction,” Bradley says. “Writers are increasingly trying to bring that back in sight.”

Tade Thompson does it in his trilogy of “Rosewater” books, named for a city that arises around a massive alien dome that appears in Nigeria. Rosewater’s inhabitants have been drawn to the new city by the desire to worship, study or exploit the mysterious new presence. Rivers Solomon does it in their novel “An Unkindness of Ghosts”, set on a vast generation ship carrying the remnants of humanity to the “Promised Land” — a vicious, highly stratified society that carries distressing echoes of the plantations of America’s antebellum South.

“What’s brilliant is we are seeing so many alternate futures, and that’s because the writers are coming from many alternative backgrounds,” Newitz says. Science fiction is no longer the exclusive domain of white males. Instead, Newitz says, publishers “are embracing immigrant perspectives, perspectives of people of colour, of women”.

Take the future conjured by Annalee Newitz in their novel, “Autonomous”. On its surface, “Autonomous” is a thriller about a pharmaceutical pirate, Jack Chen, racing to find the cure for a stimulant that is causing people to overwork themselves. She is being pursued by Eliasz, a military agent paired with a military robot called Paladin.

Newitz paints a vivid picture of life in the 22nd century, a time when almost every disease can be cured by drugs that are fiercely guarded by pharmaceutical companies, where humans work alongside robots and both exist on a sliding scale between freedom and servitude. It is a world shaped by current concerns with monopoly capitalism, biotech and the erosion of workers’ rights.

More international authors are being translated, with writers from China’s Liu Cixin to Argentina’s Agustina Bazterrica building English-language followings. “There is a real effort among publishers, among readers, among fans, to internationalise sci-fi,” Burke says. “They are bringing in ideas coming from places like Brazil, Japan, China, the Middle East.”

It is no surprise that these voices from the edge paint a very different view of the future. As Newitz points out: “When someone’s been marginalised, they’re not envisioning the same kind of future that Steven Spielberg and George Lucas imagined.”

The idea of humanity heroically conquering new frontiers has also ebbed in recent decades as global history has been re-examined and the very idea of conquest has come to be seen as problematic. Even the ever-optimistic “Star Trek” franchise has come to acknowledge that there are consequences to boldly going where no-one has gone before.

In a universe constructed around the ability of starships to travel effortlessly to distant points, a key storyline in Netflix’s “Star Trek: Discovery” involves the finding of a “spore drive” that enables the crew to cross vast distances using the mycelial network, a subspace ecosystem that connects all of existence — only to discover that they have brought a disease into the network and threatened all life.

Ideas of connection and community are central to today’s science fiction, although those communities are not necessarily limited to humans, or even human-created intelligences. “Over and over again you see stories about beings finding kin with other beings, communities not structured by traditional notions of binary heterosexual relationships,” says Bradley. This, no doubt, reflects the re-examination of gender currently taking place in society. He adds: “The most fundamental categories we have used to structure human society for a very long time are in flux — science fiction is trying to find the ways new communities might look.”

In Laura Jean McKay’s novel, “The Animals in That Country”, a new flu leaves survivors with the ability to understand the language of animals, giving McKay licence to explore the ways we might interact with creatures that are fundamentally different to ourselves. In “From the Wreck”, a historical novel with a twist of sci-fi, one of Jane Rawson’s most memorable characters is a shapeshifting alien that seeks refuge on Earth and collides with the survivor of a shipwreck.

Even the plant world is getting in on the action. Sue Burke’s 2018 novel, “Semiosis”, gives the classic first-contact story a fresh spin: humans settle on an alien planet only to discover that the most intelligent local life form is actually a species of bamboo. The novel charts the way plants and animals learn not just to live together but also, when necessary, to fight together, with Stevland the bamboo marshalling other plant species. Like many other sci-fi writers, Burke is inspired by new discoveries about other species — some of which live very close at hand.

“One of my house plants killed another one,” Burke says. “When I researched it, I realised that plants compete horribly. They’re not passive. They will do anything they can to survive and they have a lot of tools. Except for being able to think and plan ahead, everything in the book is something that plants can actually do.”

Perhaps the most alien creatures we could ever encounter, however, is ourselves. As the likes of Elon Musk plan for future colonies on Mars, Annalee Newitz is interested in the way space colonies will influence our development as humans.

“Think about what’s going to happen when we’ve been in space for a million years and re-encounter each other,” they say. “We’ll have developed radically different cultures.” And it’s not just humans that may develop differently in these new environments. Although Newitz has put a future hominid at the heart of the novel they are currently working on, some of the supporting cast members are clamouring for their own narratives.

“There’s a cow who’s a really interesting character and I started thinking, ‘What’s going on with the cow?’” Newitz says. “Three chapters later, the cow — who’s a really awesome cow, by the way — has had a whole political awakening and is engaging in activist politics.”

One thing Newitz is confident about: most radical changes in our future will come not from technology, but from a new way of thinking about the life forms that share whichever world we live on. “I do think we can get to better worlds, we can build better societies,” they say, “but it requires not new technology, but new human politics.”

A version of this article appears in print in our second edition, Page 122 of T Australia with the headline:
‘2021, The Year Truth Became Stranger Than Fiction’
Order a copy | Subscribe