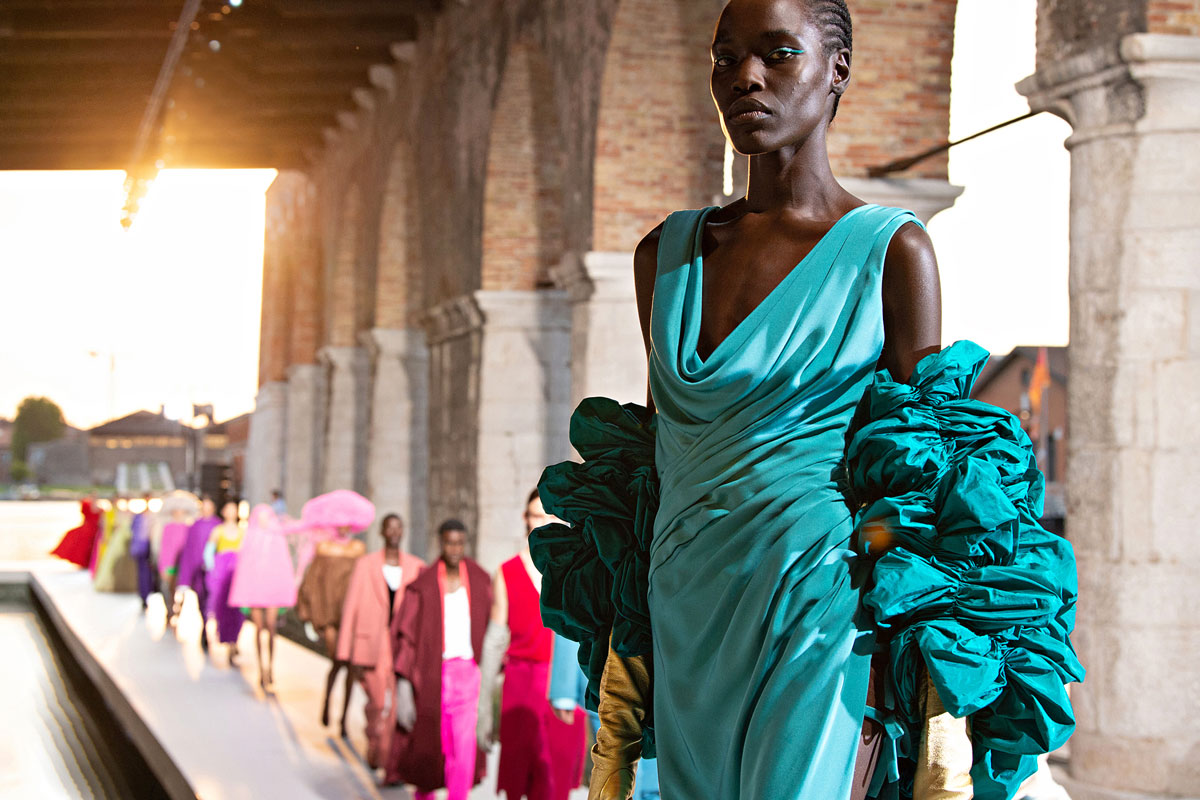 The Venice Biennale has long been a magnet for the fashion flock, a place to trawl for art and ideas the way it once shopped for buttons and trim in the garment districts of the world; to perhaps engineer the Next Big Art/Fashion collaboration, a mutually beneficial back-scratching arrangement of marketing and commerce that has begun to seem as mechanical as the Ford assembly line. In July, however, with a couture show at the Architecture Biennale, Pierpaolo Piccioli of Valentino took the relationship to an entirely different, more meaningful, level.

Since around October 2020, he has been conversing with 17 contemporary artists — about their work, sure, but mostly about life in general, process, emotion, what turns them on — thinking about how to integrate their points of commonality in cloth. Not by replicating a painting or sketch line by line, like some sort of ballgown equivalent of the museum souvenir tote (lots of brands have been there, done that), but by incorporating the essence of the thing so it transmogrifies into a new form.

The result — shown at sunset beneath the brick arches of the Gaggiandre, the former shipbuilding yard of Venice, with water lapping at the edges of the runway and Cosima, the British singer, performing live with just a piano — was as powerful an argument for the interconnectedness of time, human connection and creativity as anything fashion has produced. Coming a week after the last couture show in Paris, and almost a year after this collection was first conceived (a full year! It’s like a millennium in fashion time), it was entirely worth waiting for.

The lushness of Piccioli’s palette — as a designer, he is the best colourist since Yves Saint Laurent — was on full display; so was his throwaway elegance, and his generosity. Not just to his atelier (his show notes name-checked the individuals who sewed each garment) but to the bodies that will wear the clothes.

The way he can combine loose, stone-coloured hip-slung khakis with a chartreuse tank top and matching leather opera gloves, then throw on top a sky blue cashmere cape lined entirely in sequins. Or put a micro LBD beneath a white ostrich feather hat by Philip Treacy, looking like the offspring of a jellyfish and a sea anemone, the tentacles floating eerily in the wind atop an attenuated silhouette.

Or toss a lilac cashmere scarf atop a sparkling spearmint T-shirt, tucked into a pair of grape trousers (this as part of his couture menswear) with Kermit the Frog gloves. It was a bit like tipping pieced together from shadows and silhouettes of intertwined arms in ruby and dried-blood red. One pullover parka that looked like an abstract landscape was made from 46 kinds of fabric; another contained 150. What looked like black brushstrokes on a papal red jacket were actually thread, each painstakingly embroidered to seem as if they had been dashed off in a second.

“I am not trying to create ‘lifestyle’,” Piccioli had said in his atelier in Paris the week before the show, looking at one of the billowing taffeta gowns in pure, saturated shades that closed the collection and referring to a term that has become a rote part of the fashion mantra. “That’s about wanting the same car, going to the same hotel on vacation. I want to create a community, which is about values and connections.” And, perhaps, the future. Less “Death in Venice” and more like rebirth.

A version of this article appears in print in our third edition, Page 58 of T Australia with the headline:
‘Rebirth in Venice’
Order a copy | Subscribe