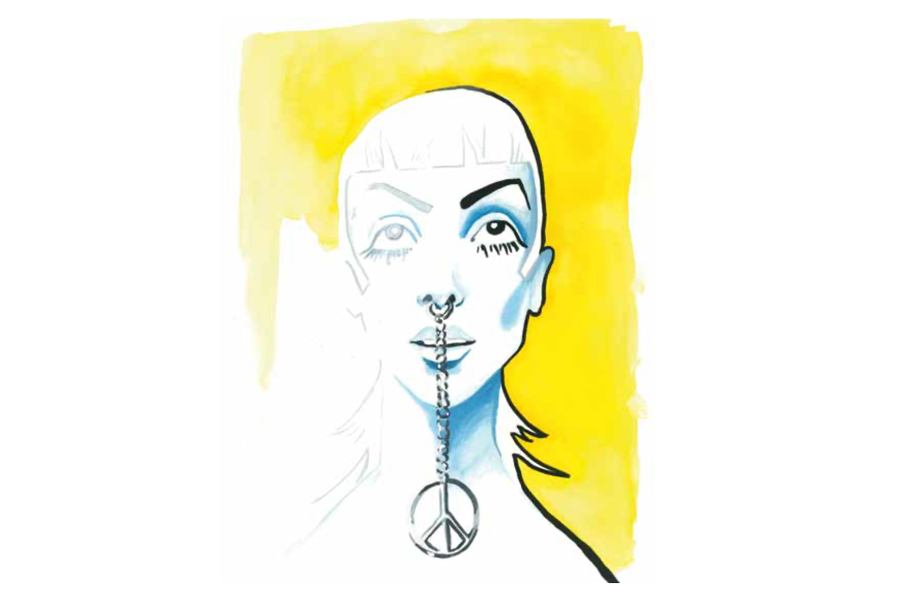 Throughout the 20th century, youth culture regularly exploded onto the streets in the aftermath of massive social change. Wars, gender politics and economic recessions resulted in waves of wickedly attired young men and women, and the world watched on with wonder, bemusement and sometimes horror as new fashions emerged from a radically altered society.

Occasionally bright and beautiful but often dark and rebellious, the styles expressed their joys and frustrations in an endless parade of originality. Fuelled by fashion, music and a newfound feeling of teenage empowerment, the young rebelled against the ruins of the old order and took to the streets triumphantly, wearing a kaleidoscope of fringing, flowers, leather and razor blades. But where are the children of today’s revolution in this pivotal moment, this undeniably earth-shattering time of radical change? They’ve been at home. Physically unconnected to their generation, anxious about the future, mad as hell at the government and facing the unnerving threat of climate disaster. How can they grab hold of optimism at a time like this? How will they find their voice and how will they rebel? And more importantly, at least to me, what will they look like when they hit the streets with a suddenly shocking collective gasp of glorious style?

What I do know is that when the revolution comes, it will come from the kids as a knee-jerk reaction to the end of an era, just as it has in the past. A century ago, the “flapper” women emerged out of the carnage of World War I and the Spanish flu, which collectively killed about 70 million people, most of them under the age of 30. These young Western women cut their hair — their crowning glory — into choppy boy’s styles, covered their faces in garish movie-like makeup, smoked cigarettes, drove fast cars, wore very short skirts and lived life on the edge, all in response to the social and political changes of the era. The flappers were the first youth subculture to captivate the world with their smoky haze of jazz, booze and bugle beads.

Following World War II, the establishment sought to return things to “normal” and put the kids back in their cradles. In the UK, young men responded by adopting Edwardian frock coats. And the “teddy boy” was born. Rude, brash and buzzing with style, the teddy boys (or “teds”) wore velvet-collared coats with drainpipe pants and chunky leopard-print crepe-soled shoes, commonly referred to as “brothel creepers”. Then came the menacing “rockers” in their black leather motorcycle jackets and Levi’s, followed by the “mods”, so called because their brutish behaviour was carried out to a soundtrack of modern jazz. In their tailored suits, the mods rebelled against the bleakness of postwar Britain by dancing at all-night, amphetamine-fuelled parties.

Then came the “beatniks”, who morphed into the “hipsters” and then became “hippies”. Ah, the hippies with their golden youth emerging onto the streets of San Francisco during the Summer of Love. Flowers in their hair, turned on, tuned in and dropping out of a culture hell-bent on endless war. Because of the global reach of television and music, the hippies were perhaps the first youthful counterculture to really shock on an instantly global stage. Their radical appearance created a fashion revolution unseen before the late 1960s and their reach was so overwhelming that the hippie look — all folksy with a dash of exoticism — went from the streets to the couture salons within a year.

I remember holding hands with my mother, who was wearing a thigh-length paisley mini, and asking her who the pretty people with no shoes were. “Oh, just hippies,” she replied dismissively, unaware that the paisley print she was wearing came from the streets of San Francisco before heading to Paris then magazines and, eventually, to a rack at her local department store.

After the failed euphoria of the hippie dream, a new realism bit back in the recession of the ’70s. A raging anger manifested itself in a youth movement appropriately called “punk”. It was a brutal shock. Punks were pretty much anti everything. They were anti-authoritarian, anti-consumerist and anti-corporate greed. And they were completely original. Where the hippies based their look on a country-meets-exotic op-shop mix, the punks were all about DIY. They ripped up just about everything on hand and held it all together with safety pins. They wore T-shirts with offensive slogans, cut their hair into dramatic mohawks and spat on one another in a wild rampage of teenage angst.

Within a few years the punk look had been commercialised as the hard-edged fashion that dominated the early ’80s — black leather, spikes and fiercely aggressive makeup. With the advent of the music video, all those wonderful post-punk street movements entered living rooms worldwide. I wasn’t the only teenager proudly gelling my peroxided quiff before a night out. The Wall Street crash in ’87 ushered in another recession and, in revolt against the excess of the ’80s, the kids went “grunge”. They didn’t give a damn about fashion. They wore everyday clothes — flannel shirts, op-shop finds from the ugly side of the ’70s — and they grew their hair long enough to cover their faces because they wanted their music to speak for itself. By the early ’90s the fashion world was desperately looking for a way out of ’80s excess and grunge was the golden ticket. Marc Jacobs did a “grunge” collection for Perry Ellis, received scathing reviews, was promptly sacked and was forever idolised for having his finger on the youthful pulse.

Style glossies jumped on grunge, Urban Outfitters sold a million flannel shirts, girls shaved off their eyebrows and boys wore funky frocks with dirty jeans and Birkenstocks. I wore Birkenstocks, too, much to the surprise of my fashion friends, who asked me why I was dressed like a German backpacker. Non-fashion became the fashion. But then the rebellion stopped. Status and luxury became the new normal as the internet flashed images directly from the runways onto our screens. Youth bowed down to the cult of celebrity and young women wanted to look like Paris Hilton not Courtney Love. They could get the latest looks at Zara for less than the price of a dirty frock at a vintage store. They wanted shiny new baubles, not dead people’s clothes. Teenage rebellion came in the form of a Juicy Couture sweatsuit in bubblegum-pink velour.

Even the global financial crisis in 2009 didn’t incite a street movement. In fact, it had the opposite effect as luxury brands scrambled for sales by heaping their goodies onto bloggers and then teenagers gobbled up Instagram images of them going to fashion shows in their borrowed bling. In a blatant grab for overconsumerism, the flame of rebellion was blown out and Balenciaga hoodies became the pain in every parent’s credit card debt. Where was the DIY, the depth, the desire to express that burning teenage angst? Gone in an obsessive swipe to the right of their smartphones.

Now the world finds itself at a turning point unlike anything we’ve seen since the 1920s. I don’t know what feelings are burning in the souls of today’s youth but I can take a guess. Their lives have been put on hold, education disrupted, socialising forbidden — all this along with climate change anxieties, pandemic worries and a future unknown. I suspect this generation will be the one to embrace change and own it. They will take charge of this moment and, with a force of optimism, create a new world out of the chaos.

Now, I’m certainly not trivialising the trauma of the world as it gets its head around a global pandemic and its aftershocks. But the social consequences of this moment will be staggering, particularly as the effects of this crisis will hit the young more than any other age group (not the virus itself, but the tsunami of social change that is washing over us). These are undeniably revolutionary times. And fashion has always been a reflection of global change.

Once the outside beckons, these children of the revolution will emerge and create a bold new movement in response to a changed world. Perhaps as a new wave of yet unheard music inspires them, it might crystallise as a hybrid of hippie and punk — a hope for peace tinged with rage. Or could it be the non-fashion of Greta Thunberg that ignites the flame. A disregard for consumerism that could morph into a fashion uniform. Soon they will emerge. Soon all those feelings will explode in a youthquake that we have never seen before because we’ve never been in this moment. They will express themselves visually as they take to the streets. It will be a glorious revolution and we will look on with wonder.

Whatever it is, to them I say, please shock us. Shake us up with a youth movement so daring in its originality that we will sound like our parents did when they were confronted with the bleached mohawks of the ’80s. A renaissance is coming. It will be a great unleashing of creativity and culture. And we will pounce.

A version of this article appears in print in our launch edition, Page 42 of T Australia with the headline:
Where are the Children of the Revolution?
Order a copy | Subscribe 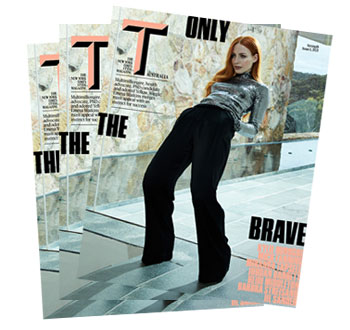