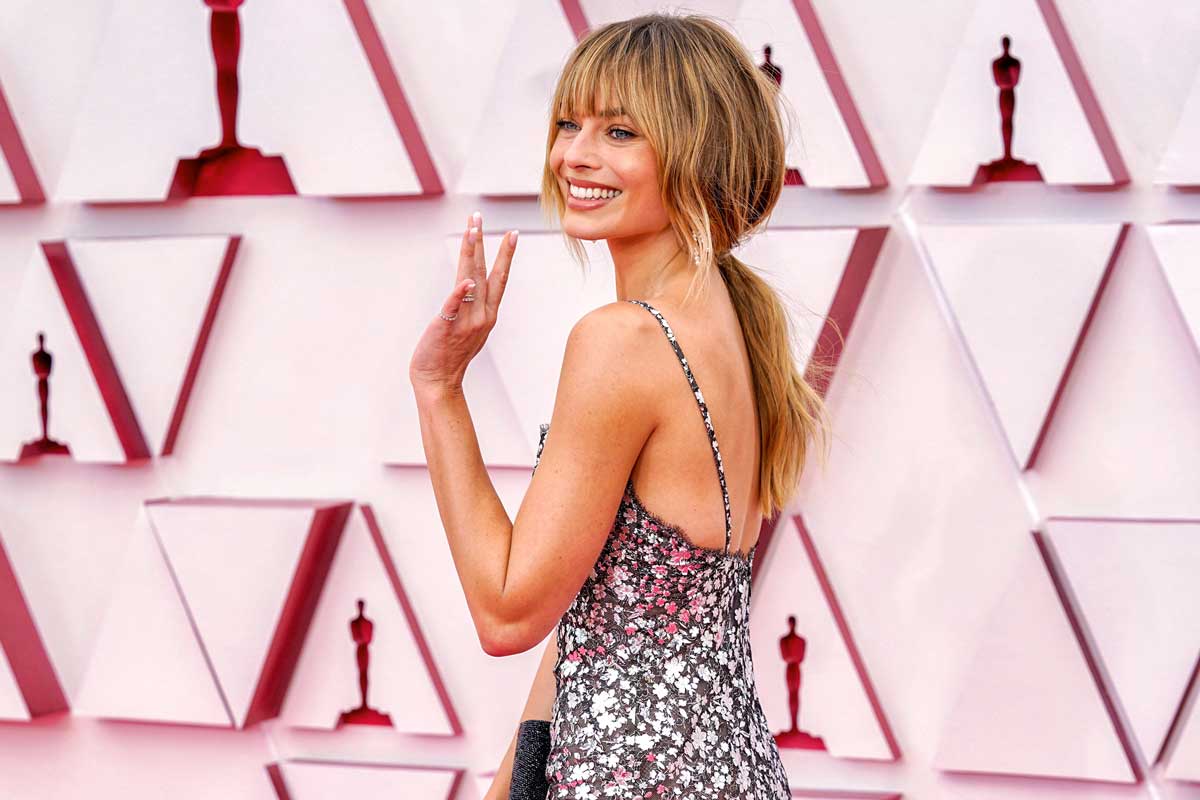 On a video call from her Los Angeles home, Margot Robbie is talking about her production company’s films, “Promising Young Woman” (2020) and “I, Tonya” (2017). Then she pauses and moves to get up. “I’m just going to shut the door because my husband’s being really [expletive] loud,” she says. That would be Thomas Ackerley, the British assistant director and now producer, whom she met on the set of 2014’s “Suite Française”.

Such is the life of a Hollywood star in these pandemic-y times. There are scripts and budgets to look over, plus Zoom calls and a couch-based publicity tour for her latest film, “The Suicide Squad”, in cinemas in August — all while her spouse bangs away in the next room. With Covid-19 pushing back release dates in 2020, the Australian actress will appear in several movies this year, each requiring publicity. And in the midst of it all, LuckyChap Entertainment, the production company she runs with Ackerley and a couple of friends, is overseeing the rollout of two TV series: Netflix’s “Maid”, inspired by a memoir of the same name, and the second season of “Dollface”, a story about rekindling forgotten friendships.

While Robbie has drawn acclaim for her production work over the past four years, she is still best known for her film roles, which have seen her steal scenes from Leonardo DiCaprio in 2013’s “The Wolf of Wall Street”, own the title role in “I, Tonya” and deliver crackerjack performances as the delightfully depraved Harley Quinn in the “Suicide Squad” comic-book movies. When discussing her approach to the craft, Robbie is both poised and animated. “You gotta commit,” she says. “You cannot half-arse anything. That is my motto when I am on set. You have to commit 120 per cent — anything less than that ends up looking stupid.”

As an actress, she is famed for her versatility, but has the sheer breadth of roles sometimes been difficult to handle? She confesses it hasn’t always been easy: “Every character I’ve played requires something different. Some I feel I can slip into their skin a little quicker than others.” Among the more difficult characters, Robbie points to the late actress Sharon Tate, whom she played in Quentin Tarantino’s “Once Upon a Time… In Hollywood” (2019). “Sharon Tate wasn’t a character where I felt like, ‘I got this. This is an easy one,’” says Robbie. “It was more about what she symbolised: all the good things in the world. Light — light — was what I worked with most: how to feel light, how to exude light. How do you portray someone if the way they need to be portrayed in this situation is to be pure and innocent and delightful?”

Louder and more raucous roles are easier, she says. “I much prefer to scream and cry and shout. Someone did something bad to you and you feel mad about it — I can get there a lot quicker.”

Robbie longs for home, having been kept away from her native Australia for much longer than she planned. “It’s coming up for two years,” she says. “There was the pandemic and before that I was on a film or two. I miss home so much.” The 31-year-old hails from the Gold Coast, where she was raised by her mother, Sarie Kessler, a physiotherapist. Asked about the origins of her visceral connection to cinema, Robbie says: “I don’t know how to explain it. My mum asks me all the time, ‘What is it? Where on earth did it come from? It didn’t come from our family!’ ” And her ambition, where does that come from? “I don’t know. I don’t know!” Robbie protests. “I wish there was a nice story.”

She does remember coming across videos and DVDs in the living rooms of her suburban neighbourhood. “I saw ‘Fight Club’ when I was probably way too young to watch ‘Fight Club’,” she says of David Fincher’s caustic deconstruction of toxic masculinity starring Brad Pitt. “I couldn’t stop thinking about it for days and days afterward.” This, she allows, could have spurred her preference for provocative films.

Robbie attended Somerset College in the Gold Coast hinterland and was cast in a local independent film while she was still at school. At 17, she moved to Melbourne and briefly worked on a children’s TV show, “The Elephant Princess”, alongside an unknown Liam Hemsworth. Then she landed a role on “Neighbours”. It was a small job at first, playing a high-schooler (her name appeared at the end of the credits, just above the animal trainers) but she quickly rose through the ranks and stayed on the show for two-and-a-half years. In the meantime, she was honing her skills and teamed up with a dialect coach to perfect her American accent.

On leaving the soap in 2010, Robbie flew to the United States, arriving just ahead of pilot season. There, she immediately scored a role on a TV show — much hyped at the time — about air stewardesses working for Pan American in the ’60s. “Pan Am” was cancelled after one season but it was enough to give Robbie her big break.

That would be a wound-up Martin Scorsese flick about a louche Wall Street scammer, played by an over-the-top DiCaprio. Robbie, clothed and unclothed, matches him scene for scene, all while nailing a honking Brooklyn accent. So, how did she pull off that sensational performance? Again, she points to her commitment. “I just go in hard,” she says. “I go big. I have to go big to kinda be able to do it.” From there, Robbie considered her prospects and gradually took on more difficult parts, playing a clever con artist opposite Will Smith in the film“Focus” (2015) and Queen Elizabeth I in “Mary Queen of Scots” (2018), which had Saoirse Ronan in the title role.

Not every film has been a hit. The ageing producer Jerry Weintraub chose Robbie to play Jane Clayton in his swan song, a long dreamed of Tarzan reboot, featuring Alexander Skarsgård. Released in 2016, “The Legend of Tarzan” wasn’t exactly a flop, but it didn’t find the audience to justify its expansive budget.

In 2019, her best year to date, Robbie starred opposite DiCaprio and Pitt in “Once Upon a Time…In Hollywood”, which turned out to be one of the most acclaimed films of the year. Months later, she played a conflicted news producer alongside Charlize Theron and Nicole Kidman in “Bombshell”, an unblinking account of sexual harassment at Fox News. For this, Robbie received her second Oscar nomination, for Best Supporting Actress.

Robbie is well known for her talent and beauty (the latter earning her several lucrative advertising campaigns) but while no-one was looking, she has also become a serious player in Hollywood’s production industry. “To be honest,” Robbie says of her work with LuckyChap, “the projects that we get very excited about are the ones that scare us — a lot. I find that in the roles I pursue as an actor and the projects we pursue as producers.”

It all began as something of a lark, an impulse project she dreamed up in 2014 with her now husband and Josey McNamara, both aspiring producers at the time, plus a friend from Australia, Sophia Kerr. Their goal: to collaborate wth female directors and screenwriters to tell difficult stories about women. “They are provocative in a certain way, they are challenging in a lot of ways,” Robbie says of LuckyChap’s films and TV shows, which she approaches with a simple question: “How do you keep engaging people and keep pushing the conversation to a place where people don’t have a quick and easy answer?” The idea, she says, is to get people thinking.

To read the rest of this article, all you need to do is pick up a copy of our latest magazine, on sale now at newsagents nationally, or online.